Mera Dil is a non-profit organization that supports thanks to:

With the payment of 20,00 euro per year will become a friend of Mera Dil helping us to support the association and any extraordinary emergencies

PRIVACY: We inform you that the data provided will be treated according to the Personal Information Protection Act (D. legisl. June 30, 2003, n. 196) and will not be disclosed to third parties. Taking contact with us, you declare your consent to the processing of your personal data.

Vs for important occasions such as baptisms, weddings, christenings and birthdays, because you do not decide to purchase one of our custom bags?

With a minimum bid of 5 € each will have the opportunity to receive at home the mere dil bag entirely produced in India in the factories where they work widows, with 100% natural cotton and our logo.

You can complete your wedding favor entering into fragrant incense, adding just 0.50 cents more, otherwise you can fill them as you want to vs choice (sweet or caramel).

For information and details, please contact us at our email: meradilonlus@gmail.com 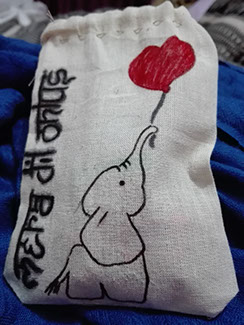